Skip to content
Day 57 – the art of being authentic, conscious and abundant woman series continues….
what I feel like saying…
We were watching the Davinci code movie again recently and my biggest takeaway was the suppression of women and their powers.
For many generations, I’ve heard stories of how women were burnt as “witches” , buried alive as children and many more.
Thinking of it, it felt truly stupid to kill the women population because the growth of humanity depend on us. Creation took place in our wombs.
Killing us means killing humanity. Without us, humanity will be extinct, one day (Unless the men are ready to give birth, on their own) .
OK, it’s quite sappy really to go down that path and do more research.
Let’s just take a look closer to us. Our own surroundings, our families, peers, workplaces and community.
How many times were we being demoralised with thoughts (our own) and words expressed (own and by others) such as:
Women were made to handle the family and the kitchen, why do they need to go to school at all?
Women are not as tough and efficient as men in the work place.
Women are emotional creatures and that jeopardises their path of success.
And many more…
I personally have heard these a thousand times before as a child.
Growing up , I watched how difficult for my mom to earn her freedom in her own home with her spouse. And then later to carve her own freedom path as a single mother….
Not only was the immediate family unsupportive, her community too gave her a hard time.
And not just her, I watched my aunties being abused verbally almost everyday by their surroundings.
But lucky for me, I watched them soar against the tide, for their own freedom.
And I remembered, when I was in India…
I was amongst friends, who were male and youthful (mostly 20s).
As we grouped together for deeper inner work, I noticed how my ideas and another female team member’s were pushed aside because we were not taken seriously (and the course we were doing was an empowering motivational program).
We were the only 2 women in a group 7. And I began to get  frustrated to communicate my “matured” perspectives  based on my life experiences. (I was the oldest, 38).
I then broke down and cried. I just felt so hopeless and helpless. To think that in this modern technology where women and men supposed to be equal, this kind of limited mindset still exist.
I felt I was shuffled back to the dark ages where women were massacred in masses and suppressed.
But somehow, in between, there were many “aha-s” we learnt as a group. And I went on stage to shared them with my vulnerability.
And one of my Mentors applauded my courage and told me that she was proud I took that bold move because, I spoke out for many millions of women in India who thought they did not have the right to voice out the way I did.
So, ask yourself…
In what way were you affected by the suppression of the women from the past?
How about now? Are your surroundings empowering or demoralising for you, as a woman?
What about your beliefs? Growing up, were you subjected to the above biase?
If you are a man, check on yourself in what way, are you suppressing the feminine race? Or just the women in your family? How can you improve? How can you take steps to empower them and yourselves?
I believe men and women need each other. Together we are much powerful than separate.
And I have said this before, I will say it again….
Women Empowerment is not successful with the exclusion of men but with the inclusion of men.
As women understood their own power and embrace them, they will pass on these power of expression and freedom to their offsprings (regardless what gender) and  mankind will grow to be more conscious, awaken and definitely powerful and efficient than before. 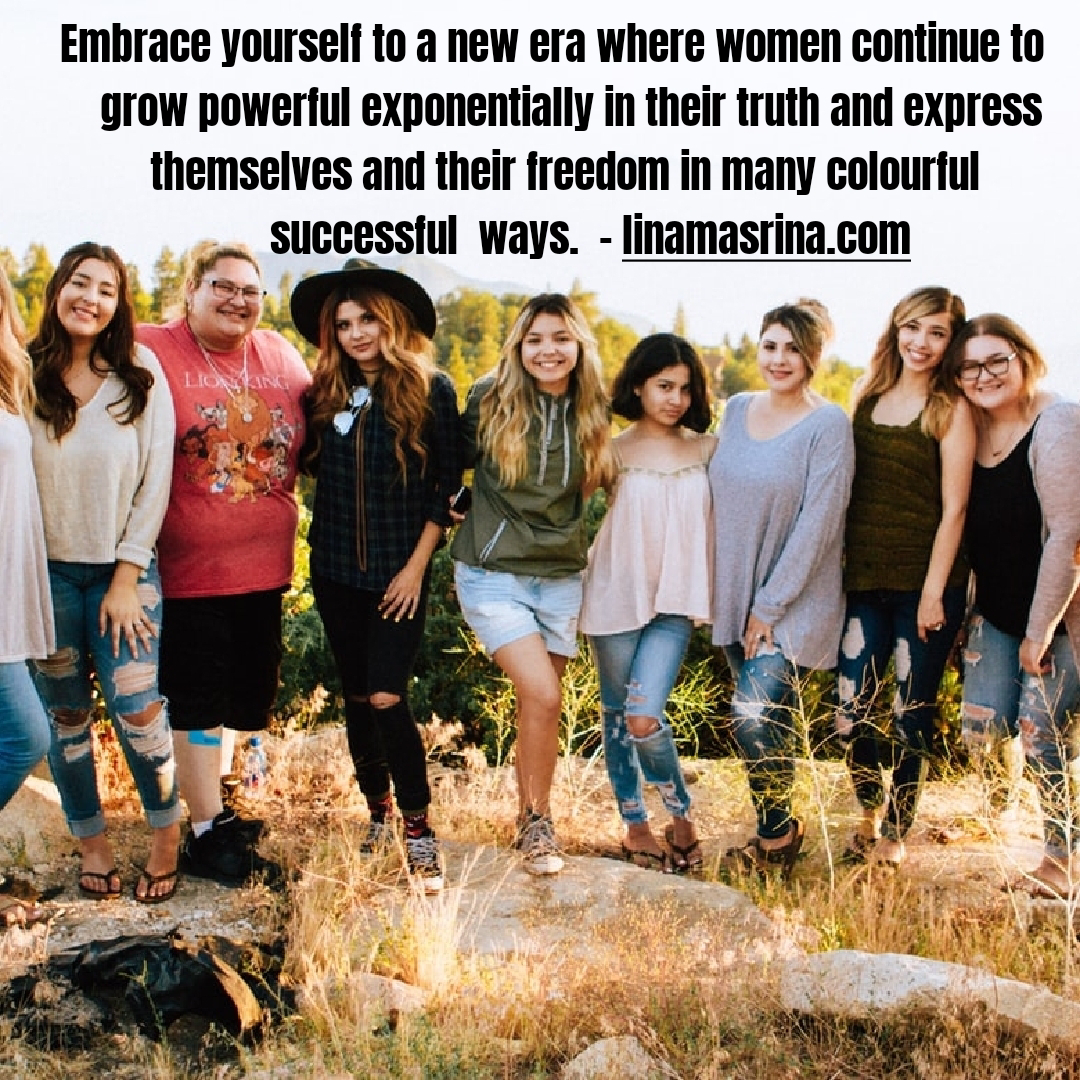 Embrace yourself to a new era where women continue to grow powerful exponentially in their truth and express themselves and their freedom in many colourful ways.
Stand up, dear women of the world. You are more powerful than you can ever imagined.
Love,
Lina.
————————————-
Creating tribes of authentic, conscious
abundant women around the world.
linamasrina.com
(Visited 9 times, 1 visits today)